M76 highroad - connection between Zalaegerszeg and the highway M7

The 40-kilometer, 2x2-lane express way under construction connects Zalaegerszeg and the M7 highway.
The completed 1.5-kilometer section of the main road Nr. 76 will start after the Alsónemesapáti vehicle classification point, then it will connect to the already four-lane section of the M76 main road by reaching the outskirts of Pethőhenye and the closed garden properties of the city of Zalaegerszeg. The investment was made by Colas Út Zrt. with the budget of almost 4 billion HUF.
The design of the road has expanded from the former 2x1 lane to a 2x2 lane main road with physical separation elements in the middle. The speed limit for traffic will be 90 km/h on this section.
The 40-kilometer, 2x2-lane M76 motorway, which will be built with an investment of about 170 billion Forint, will connect the city Zalaegerszeg and the motorway M7. The road will be the connection to the automotive test course “Zala Zone”.
Motorway works are currently underway on two following sections:
- in the east, near the Lake Balaton, 8.6 kilometers from the M7 motorway to Fenékpuszta will be built by Strabag,
- in the west, thanks to the work of Colas Út Zrt., the section of the old main road 76 between Zalaegerszeg and Alsónemesapáti was converted into a road with four lanes.

The handover of a new 3-kilometer route between Balatonszentgyörgy and Fenékpuszta is expected in 2022, but a total of 11 bridges will have to be built on this short section. The licensing procedure for the 44-kilometer section of road between Zalaegerszeg and Fenékpuszta is already underway. 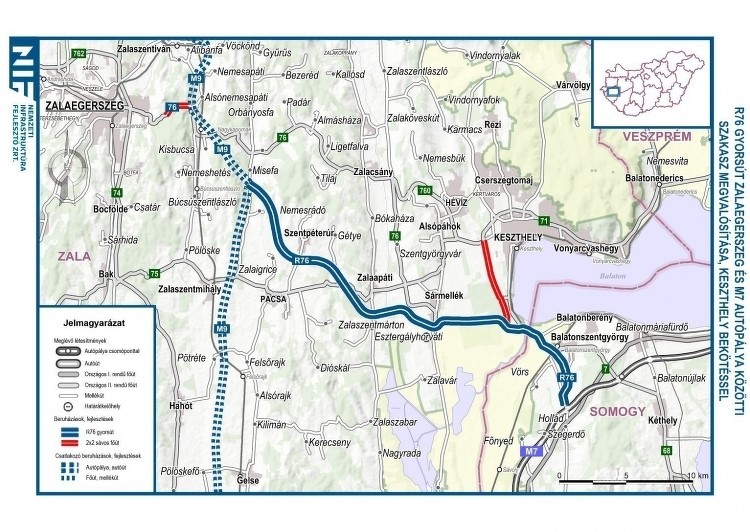