Adapting to new demands in Hévíz

Walking along the streets of downtown in Hévíz in the evening, we can see middle-aged and elderly tourists peacefully window-shopping and we can often hear Russian words.
Hévíz has always been loud with foreign words, before German was on the first place, but now Cyrill letters can be seen on business signs, on menus, shop- windows. In coffee shops, pharmacies and dental waiting-rooms we can see this unmistakable language more frequently. In the past two years, the tourism composition has changed in Hévíz, the number of Russian tourists has increased.
It is striking because we are used to hearing German and English words in Hévíz however, the Russian language is peculiar-sounding, so different from the usual western languages – said Orsolya Horváth, the excutive director of Héviz Tourism-a Local Non-profit Plc. Of course, there are still a lot more German-speaking guests but Russian guests can be more easily noticed in the town. Partly, because they are now discovering this region and are interested in culture and gastronomy, secondly, they like going out from their accomodation, they are always on the street programs. Regarding the number of guests in Hévíz, 50%-domestic, 30%- come from German speaking countries, 20% from other Central European countries and 10% from Russia. However, according to the time spent here, the rate is different. The Russians spend much more time with us, it means 20 % of the guest nights in Hévíz. German guests respond positively to the increasing number of Russian tourists, stating that they have become accostumed to the fact that they are not the only nationality here to enjoy the services of the resort. The presence of the Russian tourists is not disturbing, because their purposes are the same: they also need medical-prevention and tranquility. 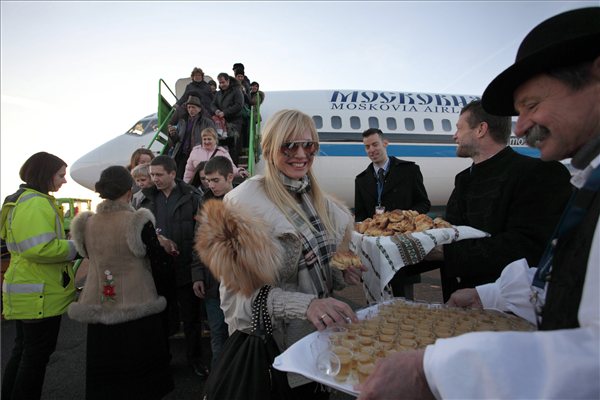 The Balaton Airport in Sármellék operated by the municipality of Hévíz makes it much easier for the Russian guests to reach Hévíz. The airport recived charter flights from Moscow weekly in 2013. Scheduled flights arrived from Riga, which is a contact point for several Russian cities. Orthodox Christmas was held for the third time this year. In addition to the opportunity to participate in a religious festival, it offers cultural and entertaining program in the months of December-January in Hévíz.
Thanks to the Russian guests there are tourists not only in the summer months in the town, but throughout the year – said Ferenc Lajkó, the president of the Association of Accommodation Providers in Héviz. This year the number of the Russian guests has reached its peak at the private accomodations, as well, soon they will be as numerous as German-speaking guests. We love the Russian guests as they usually stay for a much longer time than domestic tourists. They expect to have Internet access and rent-a-bike service at private accomodations, too. They are well-paying, grateful guests.
The accommodation providers are trying to take advantage of the Russian travellers, the organisation is now renewing their accomodation brochures, which are not only in German and English, but also in Russian. Now they are planning to launch Russian version of the webside and several language courses have also been organized for members, as quality hospitality includes a communication in the guest’s native language.
Not only in private accomodations, but also in the Hotel Spa Hévíz the Russian guests are welcome.
In 2013 compared to last year the number of Russian guests and guest nights doubled– said Edit Fodor, the hotel manager of Hotel Spa Hévíz. They come to us specifically for healing treatments, with rheumatic complaints. Russians are good guests, they like to try new things. Besides their original package they booked, they also use many other services. They tend to spend quite much money on various treatments, and almost all the ladies use cosmetic services. Russian guests are not the type of tourists who merely bathe in the hotel’s pool, they particularly enjoy swimming in the lake even in January, which gives them a great experience. Before 2012 guests from German-speaking countries were in overwhelming proportion, buti n the last two years their number has fallen significantly – continued Edit Fodor, hotel manager. We can state that it was the right time to open towards the Russian market, so they can compensate for the loss of German guests. The Russians do not seek only accomodation, but are also increasingly interested in buying properties in Hévíz.
Real estate acquisition by foreigners, of course, has always been a usual phenomenum in the spa town.
Austrian and German costumers’ wave has come to an end, they bought houses between 1998 and 2006 in the town and in its area- said László Kovács, the head of the Exclusive Immo Ltd. Now the Russians are clearly the most important costumers, they bought 60 to 70 % of all properties sold. But Hevíz is beginning to be explored by the Norwegians and the wealthy Arabs, too. At the moment we just have a serious client from England. The Russians are interested in low-cost flats as well as in old buildings, which they demolish and build a new, modern house. They are open for alternative energy sources, they, are  well informed regarding new technologies.  Firstly, they  buy properties in Hévíz, because this way they can travel here with a different kind of visa, secondly they arrive for investment purposes, they feel  their money safe here.  One of our  costumers  bought a flat because he is planning to spend his retirement by the lake.
Angelina Strizhkova from Moscow was in Hévíz for the first time, as a tourist, in 2007. Then she became a regular guest at the spa, and 2 years ago she bought an apartment house, where primarily her compatriots come to rest. When I first came here, people in Moscow did not know much about Hévíz, but this town and Hungary are beyond expectations – remembers Angelina Strizhkova.  I was completely enchanted by this multicoloured autumn, the lake,  the unique, quiet atmosphere of the town. It is not possible to get  such physical and aesthetic experience while bathing elsewhere. I had to return. Hévíz is a well maintained and friendly town and also the inhabitiants are very nice. It seems that the residents love and protect their town and also take care of the environment. It is an amazing thing for people from Moscow.
Here we have everything for a successful business; unique lake, favourable climatic conditions, good health facilities, traditions and culture of Hungary and gastronomy. I am happy to show all this to our guests and they return year after year.  I still see the possibility of development by creating  conditions for golf  and by improving quality catering services.
Őry Rózsa